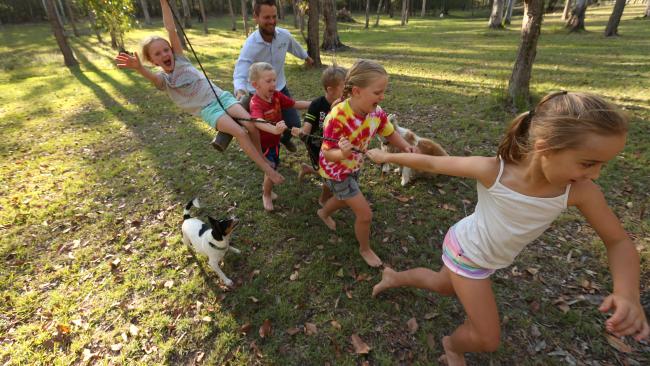 Hyahno Moser with local kids and his daughter Lily on a flying fox at home in Tamborine. Picture: Lyndon Mechielsen

Not far from where Hyahno Moser lives, a societal transformation is taking place. In the leafy community of Tamborine, south of Brisbane, a ramshackle community centre is taking shape.

Moser might have deliberately chosen his 2ha block for the space, and the nature, but he is not concerned by this nearby development. In fact, Moser is delighted: the cubbyhouse being put together by keen young builders, complete with its amateur rules and social structure, is proof that kids can form incredible friendships, show limitless imagination, gain independence and form deep friendships — if they only will leave the house.

“A computer game can hold their attention, but what’s happening outside is engaging all their senses,” says Moser, a father of four who chose Tamborine because there were other kids in the neighbourhood.

“They’re being social, they’re being active, they’re talking to others and they’re happy. And they sleep so much better.”

This isn’t just a sideshow for Moser, a pleasant interruption from serious adult life. No, getting kids outdoors is Moser’s serious adult life, his mission as program manager of Nature Play QLD, a not-for-profit organisation that reacquaints kids with the outdoors.

Smartphones and other electronic devices are wonderful technological advances, allowing us to do so much more, so quickly and so easily. But, like computer games beforehand, and television before that, they can also distract kids from their journey through childhood.

Learning, experiencing, growing (and growing up) is done differently these days, and sometimes that can be bad for kids’ health. First and foremost, kids need to be part of the world they have been born into.

There is clear evidence that exposure to different pathogens, ­allergens, bacteria and germs in childhood helps to strengthen the immune system. That not only protects children from allergies and asthma, but sets them up for better health later in life.

Unfortunately, the average amount of time young Australians spend outdoors engaging in unstructured play is steadily decreasing. And, in today’s society, that of antibacterial soaps and liquids and wipes and sprays, children indoors are more likely to grow up in a sterile environment. A recent book Let Them Eat Dirt: Saving Your Child From An Oversanitised World charts this damaging trend to the overuse of antibiotics and the threat posed by superbugs.

The 460 kids who turned up to the recent Muddy Monsters event in Logan may have had some indication what Nature Play QLD had in store for them.

“We had a big mountain of mud that kids just loved to climb and then slide down. We had muddy treasure hunts and muddy tug of war and mud sculpting.

“The aim of all this, while done on a large scale, was to show the resources we were providing kids that day were free. You can put a mud pit in your own backyard if you’re so inclined, and they will find ways to engage.”

Nature Play QLD, which has sister organisations in Western Australia, South Australia and the ACT, runs a “Passport to an Amazing Childhood” program. Already in the Sunshine State, two years into the Nature Play evolution, more than 190,000 passports have been distributed. The nature play missions the kids are given, which recorded in their passports, are just a taste of what is out there in the big wide world.

Moser grew up outdoors, and is still a keen hiker and rock climber. His family has a TV and a computer at home, for when it is needed, but no internet. Having worked in outdoor education beforehand, he initially couldn’t understand how there could be a job in teaching kids to muck around outside. Moser soon discovered many of today’s kids have simply forgotten how to play for themselves, having led sheltered lives, protected from dirt and risk. He discovered that parents were often, inadvertently, to blame. And he discovered parents were often slow to recognise the problem.

“In the carpark of a hardware store a father who had heard me talking about Nature Play stopped me and he told me that he has a child who is totally addicted to (electronic) screens,” Moser say.

“His son behaves erratically and is not himself.

“But the thing is, the dad bought him those devices thinking they were educational tools that would empower his child to be the best he could be. Now he is seeking medical intervention to get this child off the device.”

Moser revels in the excitement, creativity and independence shown by kids who take part in Nature Play QLD activities. He wants nothing more than for them to go forth and be active outdoor types (like him) for the rest of their lives. And he knows from their parents how transformative the experience can be.

“After all the stories of outbursts of anger and aggression, and children not doing anything and not communicating, seeing the energy, the life and vitality in their children’s eyes can make parents feel pretty overwhelmed,” he says.

“And recognising the impact it is having on them socially, the change in their demeanour — they just end up nicer kids — is so gratifying.”

It’s not just a case of not being inside, not being sedentary, but what a bit of nature can do for you (apart from fortify your immune system).

A recent study led by the University of Queensland and the ARC Centre of Excellence for ­Environmental Decisions found people might need a minimum “dose of nature”.

Nature Play QLD helps direct people to local or far-flung places to get outdoors. And it’s a starting point for all the outdoor activities and adventures they can devise themselves.

Of course, getting active has become a major challenge in western societies, including Australia. Put simply, today’s kids are getting fatter, are not as fit and not as co-ordinated or skilful as previous generations. They are set to grow into fat adults, more at risk of chronic illness and everything else.

In 2014-15, 26 per cent of Australian children aged 5 to 14 years were classified as overweight or obese. According to the most recent activity surveys, less than one quarter (23 per cent) of kids that age met the national physical activity recommendations every day, and only half could say they met the recommendations most days.

Now, the recommendations would probably shock most parents. But it is worth pointing out that they are evidence-based and only recently updated — not only to take into account the latest research on activity levels but also, for the first time, to put warnings around sedentary behaviour, which has its own health risks.

For infants under 12 months, supervised play should be encouraged; toddlers (one to three years) and preschoolers (three to five years) should be physically active every day for at least three hours, spread throughout the day.

Children under two should not spend any time watching TV or on other electronic devices. For children aged two to five, that should be limited to less than one hour per day, and all kids under five should not be inactive for more than one hour at a time unless sleeping.

For older kids, aged five to 12, and the teenagers, at least 60 minutes of moderate to vigorous ­activity a day is recommended, with strengthening exercises at least three days a week. Minimum.

Electronic devices should be limited to no more than two hours a day, and kids should break up long periods of sitting as often as possible.

The Moser kids and their friends in Tamborine are doing it right. It might have taken 18 months for them all to become buddies, and show interest in the same things, but they are working it out for themselves.

Nature Play QLD can also help people start their own Family ­Nature Club. “I’m a strong believer that if we’re ever going to win the battle of renormalising the outdoor play environment, we need to revitalise communities,” Moser says.

Kids, go climb a tree. Get all sweaty and grubby. Talk to the neighbourhood kids, make plans and do stuff together. And parents, for once, be grateful when your kids come home with dirty feet.