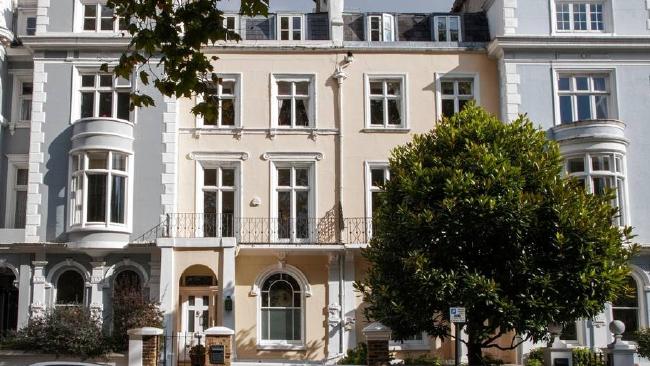 Jamie Oliver is planning to revert his combined townhouses in London’s Primrose Hill back into two properties.

To sell their 10-bedroom home, celebrity chef Jamie Oliver and his wife, Jools, may have to first undo what they’ve done.

Six years ago, the couple, both 41, bought adjacent townhouses in North London’s Primrose Hill neighbourhood and combined them into one very large home. The couple, who have five children, now plan to move and are listing the property for £9.95 million, or about $15.7m.

Amid a slump in London’s luxury market, the Olivers’ house has failed to sell — despite a $3m price cut earlier this month.

So now they’re planning to revert the house back into two properties likely to list for around $7.9m to $9.5m apiece.

In August they obtained building permits from Camden Council to carry out the work.

Until recently, ultrarich homeowners in London who wanted more living space bought up neighbouring townhouses or next-door apartments and combined them into one mega unit.

In extreme cases, they bought homes on adjacent streets and then excavated cavernous basement complexes to link them up.

But while high-net-worth buyers can afford to create these urban mansions — and some still do — the decision may haunt them when it comes time to sell. That’s because market demand for these vast homes has softened significantly.

The average sale price of homes in the £10m-plus bracket has fallen 10.4 per cent in the past two years, according to estate agents Savills.

Moreover, local authorities are routinely refusing to grant the building permits required to combine multiple residences into one. This is partly to ease London’s severe housing shortage and partly to appease neighbours fed up with the noise and disruption of these mammoth projects.

Kensington and Chelsea Council, or RBKC, has a government-set target of increasing the number of homes in the borough by more than 700 annually. As a result, officials now reject about 50 per cent of applications to merge homes.

Despite all this some owners will go to extraordinary lengths to achieve their goal. Late last year, Garrett Curren, chief executive officer of Credit Suisse in Britain, was allowed to convert three apartments in Belgravia, one of prime central London’s choicest addresses, into a single property.

To persuade the RBKC to approve his project, Mr Curren, who was unavailable for comment, paid $US6.7m for a house in nearby Holland Park. This will simultaneously be converted into four apartments, which he will be free to sell or rent out, making up for the loss of individual housing units Belgravia.

Not every owner has to go to such expensive lengths. In August, Charles Dunstone, founder of Carphone Warehouse, was granted building permits to sink a basement beneath his home in the Holland Park neighbourhood of west London. Mr Dunstone, 51, and his wife Celia, 36, own three other properties nearby and the new basements will give the properties a subterranean link-up.

The news has outraged their neighbours. They complain that the Dunstones, who have three young children, have already caused years of noise and disruption in creating their compound-style home. The Dunstones declined to comment.

Residents in Regent’s Park are no more delighted by an ongoing project by Christian Candy, the 42-year-old founder of CPC Group and the developer behind London’s ultraluxury One Hyde Park building.

In 2014 he bought five neighbouring office buildings and two houses on an adjacent street in the Regency neighbourhood.

Work began last year to convert the properties into four large houses with basement levels, despite neighbourhood objections over noise and traffic.

The project isn’t entirely commercial. Mr Candy and his wife, Emily, 34, who have 3-year-old twins, are reported to be planning to live in one of the houses, although a spokesman would only say that this was “yet to be decided”.

Another way London homeowners are adding space is by buying up smaller mews houses behind their properties, which would originally have provided stabling for horses and accommodation for grooms and carriage drivers. They then link the two properties via a basement. This, some real estate agents say, is one kind of expansion that might work in their favour commercially when they sell.

“Large houses that acquire the mews houses behind will achieve a premium once sold, due to the fact that the mews houses offer off-street parking and staff quarters above,” said Jamie Hope, director of sales at Maskells estate agents.

On Chester Square in Belgravia, a townhouse once owned by Margaret Thatcher, prime minister from 1979 to 1990, with a newly built mews house in the rear, is on the market for $46.8m.

The main house measures 721sq m and has six bedrooms and six bathrooms, according to the joint listing by Strutt & Parker and Savills.

A basement running beneath the backyard features a gymnasium and a movie theatre and links the property to the mews house behind it, providing extra living space across its two upper floors.

Lateral space — where apartments in neighbouring buildings are combined to create a huge property across a single floor — also remains popular among the ultrawealthy, said Matthew Kaye, director of Kaye & Carey.

“Lateral space today is more desirable than that found in a typical London townhouse (that spans) over five floors,” he said. He estimates that a house on a good street in South Kensington might command $3100 to $3600 a square metre, but that a first-floor apartment spread across two or more buildings would sell for over $4700/sq m.

The ultrawealthy like to live in compounds for a series of practical reasons, said Caspar Harvard-Walls, a partner at buying agency Black Brick.

“If you want the best nannies, the best cooks, the best butlers, you can’t just stick them in the basement or on the top floor anymore,” he said.

There are also emotional reasons. “It is an expression of wealth,” Mr Harvard-Walls said. “It is meeting the demands of people with very, very large budgets.”