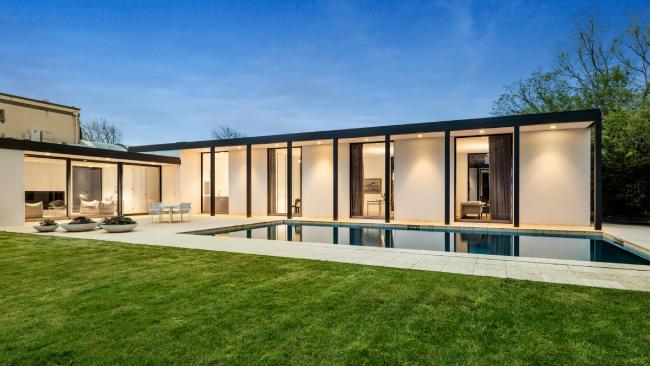 Offers in excess of $9m are being sought for Seccull House.

The penthouse on the 86th floor of Eureka, one of the highest in the southern hemisphere, has hit the Melbourne market. And there are whispers that the 85th floor empty shell is set for imminent JLL listing. The 86th floor is a lavish New York-style, Art Deco-inspired apartment listed by entrepreneur Anthony Podesta. Perched almost 300m above Riverside Quay, Southbank, the 660sq m whole-floor apartment fitout was two years in the making. It comes with four ensuite bedrooms, a library, large entertaining space, theatre room and even has Eureka Tower’s only gas fireplace. There are imported designer fittings with French oak parquetry flooring and handcrafted Art Deco ceilings. Italian marble is used throughout the apartment. Podesta, a former high school teacher, made his fortune by founding McMillan Shakespeare, Australia’s largest provider of salary packaging and notated leasing. RT Edgar agents Tim Wilson and Anthony Grimwade are seeking offers over $18 million in conjunction with Melbourne Sotheby’s agent Greg Herman. For the more traditional buyer there’s the 99 Spring Street penthouse offering, which has been listed by businessman Greg Hargrave.

Seccull House, the modernised, acclaimed Guilford Bell–designed home in Melbourne’s Brighton, has been listed by the Kay & Burton agent Darren Lewenberg. Offers in excess of $9m are being sought for the home of cardiologists Martin Hiscock and Silvana Marasco. The couple were only the third owners of the home since it was built for William and Elaine Seccull in 1972. Considered one of Bell’s most important works, Seccull House was renovated by Martin and Silvana with the help of Bell’s younger business partner Graham Fisher. Bell’s iconic full-height, uninterrupted glazed windows allow the home to open to the outside. Martin Hiscock recently led the team seeking a revival of fortunes at Richmond Football Club.

The Brisbane home of mining magnate Peter Bond and wife Louise has been listed for sale. Rivergum Retreat in Fig Tree Pocket was the
1.2ha riverside estate they bought for a cut-price $9.5m in 2009 after it had spent more than two years on the market. It had initially been listed for $12m by Zoe Cheihk, wife of developer George Cheihk. The homestead encompasses a vast 1956sq m of floor space and has seven bedrooms, nine bathrooms and three home offices. The luxury continues with a 12-seat gold-class cinema room. Offers close December 2 through Adcock Prestige agent Jason Adcock.

The Dalkeith home of Sirona Capital chief Kelvin Flynn and wife Vanessa is under offer. The couple were asking for $3m-plus offers through Acton Cottesloe agent Deborah Brady, having spent $3.35m in 2011. Set on 1315sq m, the four-bedroom home comes with a tennis court and a heated swimming pool amid established gardens. Flynn, who founded the merchant bank in 2009 after a stint at Goldman Sachs, is also a non-executive director of several mining companies.