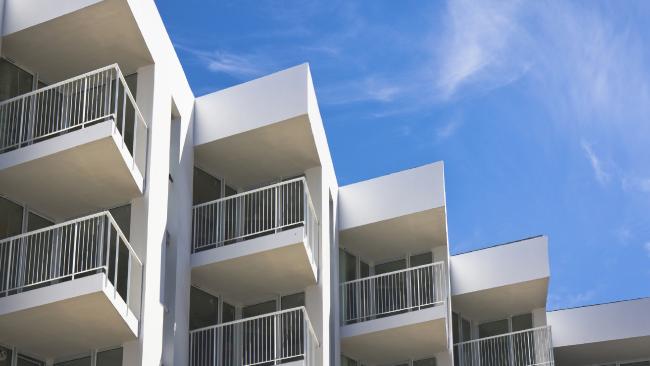 Apartment prices in many cities are predicted to dip.

NAB has warned of sharp apartment price falls next year as a new survey reveals property professionals are more bullish on house price growth through the next 24 months despite a slide in industry sentiment.

The NAB Residential Property Survey for the second quarter found sentiment sliding three points to a reading of +3, well down on the long-run average of +13.

However, the sector is now more confident in price rises through the coming two years, with national house price growth of 1 per cent expected, as against prior expectations for a more modest 0.7 per cent rise.

Through the second quarter respondents tipped price expansion of 0.7 per cent, up from 0.4 per cent in the first quarter.

“It’s still a mixed picture across Australia, with house price expectations for the next 12 months holding up well in the eastern states whilst staying flat in SA/NT and continuing to fall sharply in WA,” NAB chief economist Alan Oster said.

NAB is even more bullish than the industry players in the near-term, sharply upgrading its outlook for 2016 house price growth in the capitals from 1.5 per cent to 5.1 per cent.

The bank also made a drastic change to its 2016 view on apartment prices, tweaking a 1 per cent price reduction to an expectation of gains of 3.6 per cent.

The latter move comes amid persistent talk of a looming oversupply of apartments in central areas, which NAB foresees finally weighing heavily next year.

In its first 2017 projection the bank tips apartment prices across the capitals to slide 1.9 per cent, headlined by a 3.5 per cent slump in Melbourne and a 5 per cent fall in Perth.

Sydney apartment prices are projected to dip 1.5 per cent next year, with Adelaide and Hobart the only capitals expected to see rises.

It’s a better story for house prices as NAB tips 0.5 per cent growth next year, although that represents a sharp slowdown from this year and comes in shy of the expectations of the industry members who participated in the NAB survey.

Brisbane is anticipated to lead the way through a gain of 1.9 per cent, while the hot markets of Sydney and Melbourne are expected to experience modest expansion of just 0.2 per cent and 0.4 per cent, respectively.

Perth is the only capital forecast to witness a slide in house prices, with a 3.5 per cent retreat seen on the cards.

“Our upwards revisions in (2016) price forecasts reflects the strength in prices to date. Over the last six months, Sydney and Melbourne prices have increased by an annualised rate of nearly 19 per cent and 12 per cent respectively,” Mr Oster said.

“However, while there is significant amount of uncertainty over the outlook for prices, we expect that this renewed momentum in the housing market is unlikely to be sustained over the longer term.”

Mr Oster said the likely apartment price declines in Perth could be pegged to economic problems tied to the end of the mining boom, while falls elsewhere would largely be a factor of higher supply and weaker investor demand.

The reduced investor demand is seen in part due to stricter lending requirements thanks to new regulations, with a clampdown on foreign buyers in particular.

The NAB survey suggested this was already being felt in the sector as the market share of foreign buyers in new Australian housing markets softened for the third straight quarter.

The market share of foreign buyers in established markets was unchanged at 7.2 per cent, NAB added.

Despite the mixed outlook the bank sees little threat of a “sharp correction” on the horizon provided there is no shock event that forces either the unemployment rate or interest rates sharply higher.